First-Timers Tips for Cruising (with Children)

7 Reasons You Should Splurge for a Suite on Your Cruise

True Essentials to Pack for a Cruise – Norwegian Jade

How To Replace RV Flooring With a Raised Slide

How did we replace our RV flooring?  That is a question we’ve received multiple times concerning our RV Remodel.

For materials, we scoured the internet and found that most RVers recommend a vinyl flooring sold by Home Depot, Allure Trafficmaster plank flooring to be exact.

We did quite a bit of reading about the product and started to find alarming reviews, like here and here and here.  There were a variety of issues but the most common seemed to be surrounding Home Depot’s lack of customer support for the product and how stinky the flooring was once installed (off-gasing).

Some people said it took months for the smell to go away and that was with open windows.  Since this remodel was done late in the winter, airing wasn’t an option and we sure didn’t have a few months for it to finish off-gasing before we lived in it.

The more we read, the more we became concerned. In the end we decided to NOT install Allure.

Now in all fairness, I KNOW many RVers use this flooring and have no issues whatsoever.  But we didn’t want to be one of the ones that got a bad batch.

We then looked to our local Lowe’s to see if they had a similar flooring that was not prone to off-gasing issues.  They had something similar, yes, but did it off-gas?  It was possible and we weren’t taking any chances so we settled on the most afforable option out there.  Mark installed sheet vinyl.

Is it stylin’ and amazing?!  No. but it serves it’s purpose only cost us about $300 to do our entire camper.  4 months later, we’re very pleased with the flooring.  It’s held up well and if for some reason we need to do anything to the subfloor, we can pull up the vinyl and place it back down.  Easy peasy. 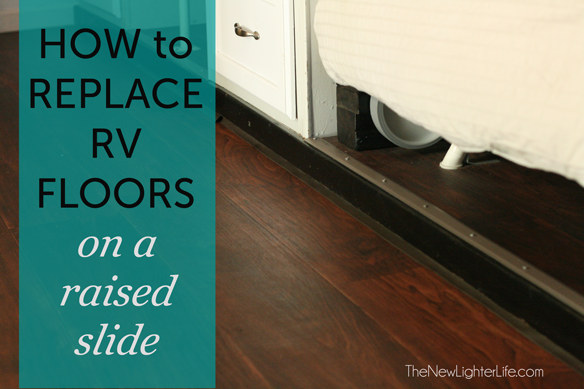 Our 96′ Winnie has one large slide over the dining and living area.  Because of the year, it is a raised slide and sits about 3 inches higher, (see crappy picture below).

So how do we properly replace the RV flooring on the slide.

When Mark demo’d the camper he took out the booth dinette and couch and ripped out the carpet in the slide area.  We were a bit apprehensive about dealing with a raised slide but after the fact, Mark would tell you it was very easy to do. 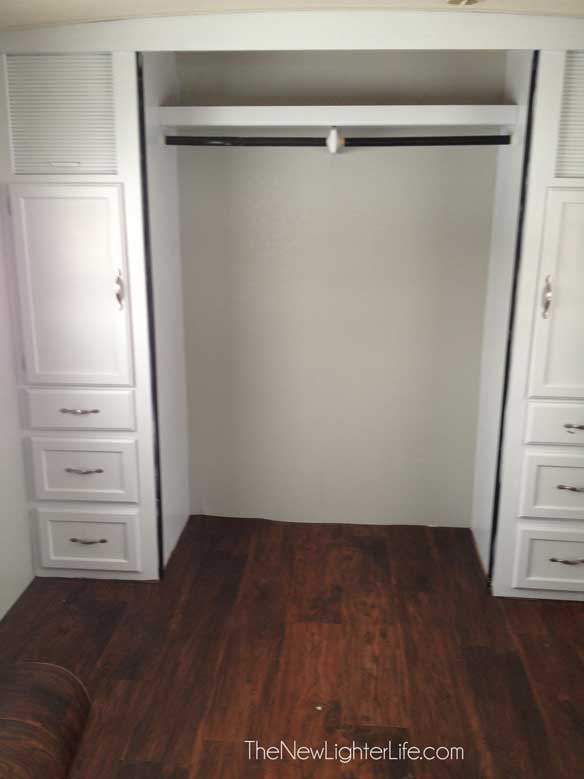 Once all the carpet and staples were removed, he simply laid the vinyl down and trimmed it with wood against the wall and screwed in a metal transition strip along the top at the front of the slide and in the doorways between the bathroom and bedroom.

He had to deal with the front of the slide, which was originally covered with carpet. (see crappy picture below) 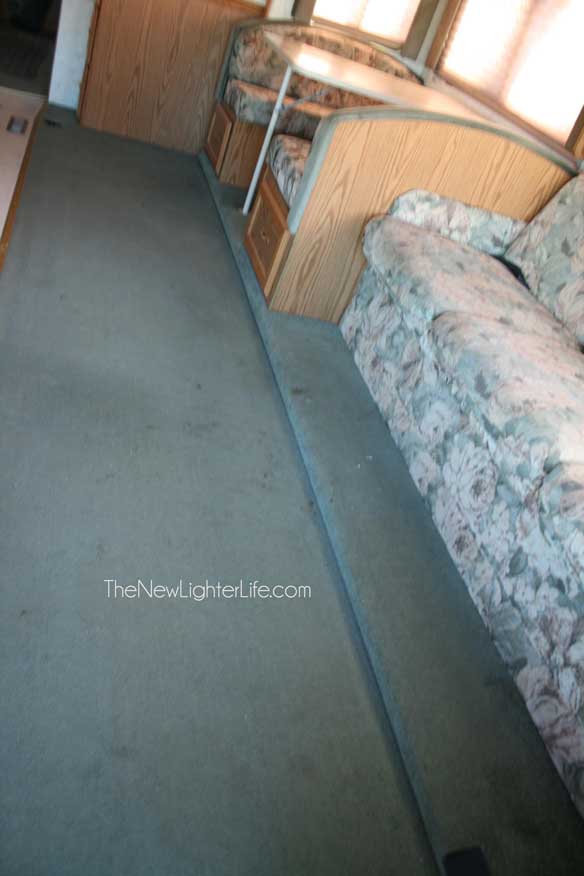 Our son, Eli, was employed in the sanding of the board and Mark stained the wood a dark color. Mark wanted to make sure the slide was sealed so he installed 3/4″ weather stripping all along the slide first.  It was screwed right to that metal strip you can in the picture below.  This is the type of weather stripping that is used on garage doors. 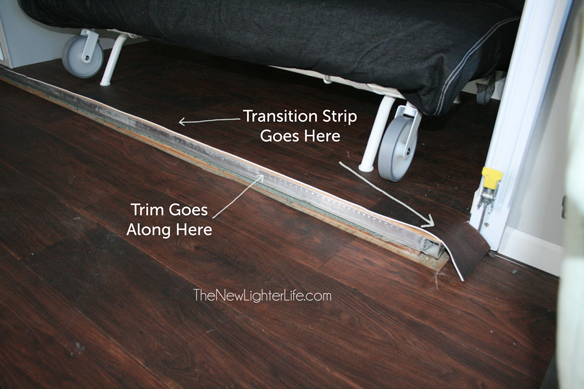 After the stripping was attached, he screwed on the sanded and stained trim board and lastly the metal transition strip was attached to the top outer edge of the slide (and overlaps the front wood trim slightly. 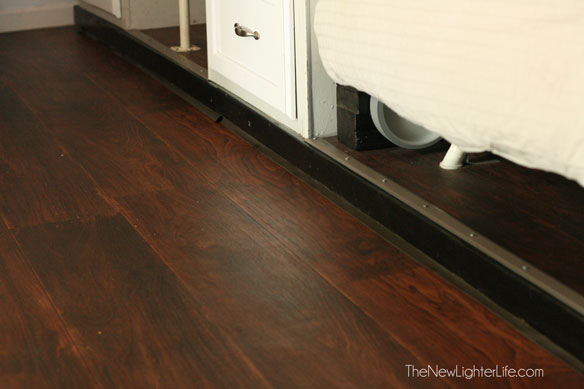 So this all worked great and looked awesome.  But after taking the slide in and putting it back out we ran into a problem, the front corner of the wood trim snagged the vinyl.  It snagged it good. 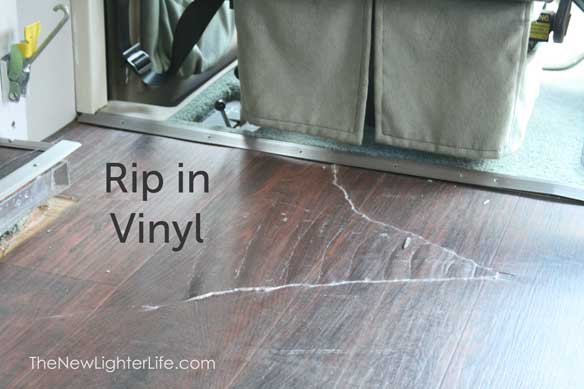 Rather than replace the entire sheet of vinyl, Mark cut out the offending area which was a 1 1/2 foot by 3 1/2 foot area.  He cut some fresh vinyl from the scraps we had and tacked it down with 2-sided carpeting tape. 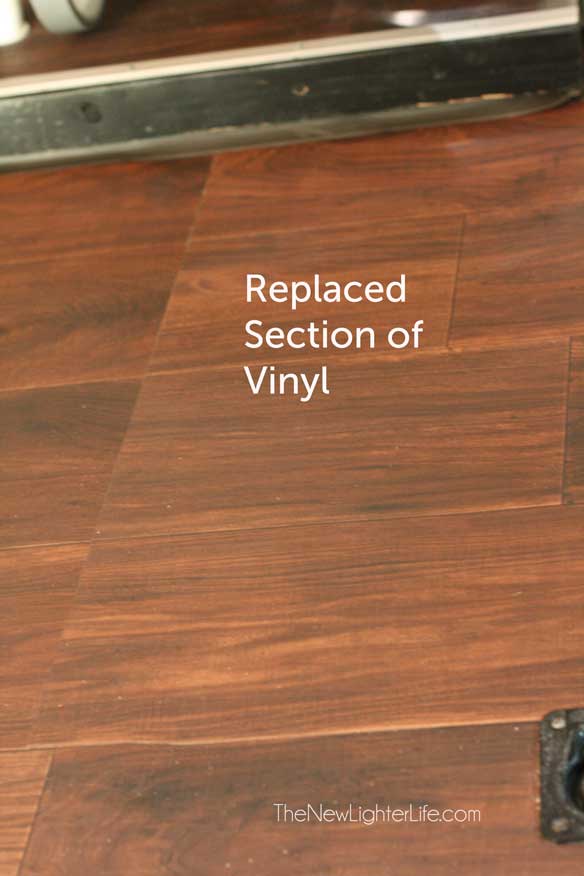 In the picture, it is obvious.  But if we didn’t point out to you in the camper, you’d likely  never notice the patch job.

To stop the slide from snagging the vinyl again, Mark trimmed about 1/2″ down the length of the front trim pieces

The stairwell was previously completely covered in carpet.  In order to get all the adhesive off of the stairs, he had to spray a product (similar to Goo-Gone) and scrap the glue off. 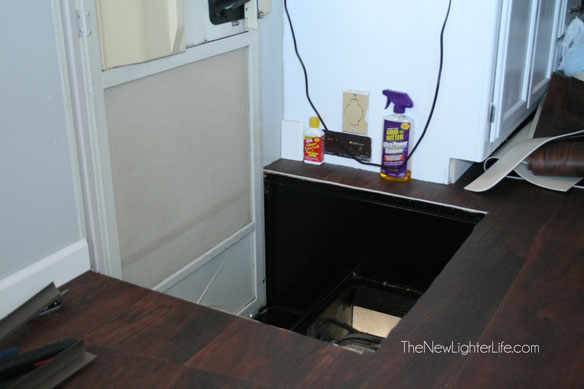 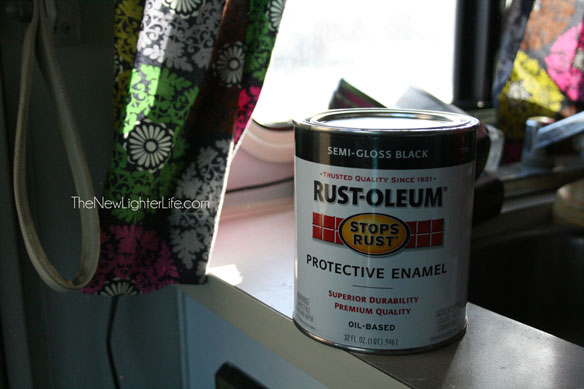 Lastly, he placed vinyl on the top of each step and trimmed the edges with a metal transition strip.

That open step is where the batteries are housed.  Once the cover is on, you can see the vinyl on those 2 stairs.

The picture below shows the trim that Mark placed around the outside walls where the vinyl was placed.

And here is a closeup of the finished stairs with all the transition strips in place. 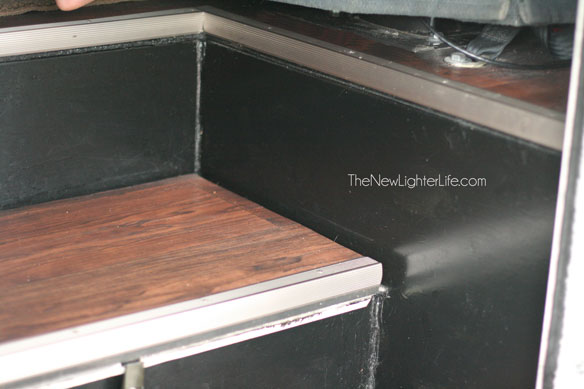 Up until this writing, I’ve not convinced Mark to remove the cab carpeting and recover the doghouse (the engine cover between the 2 front seats).  Truth be told, we don’t even notice the old upholstery/carpet.  Hardly.

Maybe someday, but for now our flooring is complete.

In 2012, our family sold it all and began an RVing adventure. We simplified and lived in a 300 square feet home on wheels. If you are interested in our past RV life and remodeling of a 96 Winnebago, please click here.

Today, we live in a traditional home but strive to keep things simple and live with purpose. I post regularly about what we do to live an intentional and abundant life regardless of where our home is.